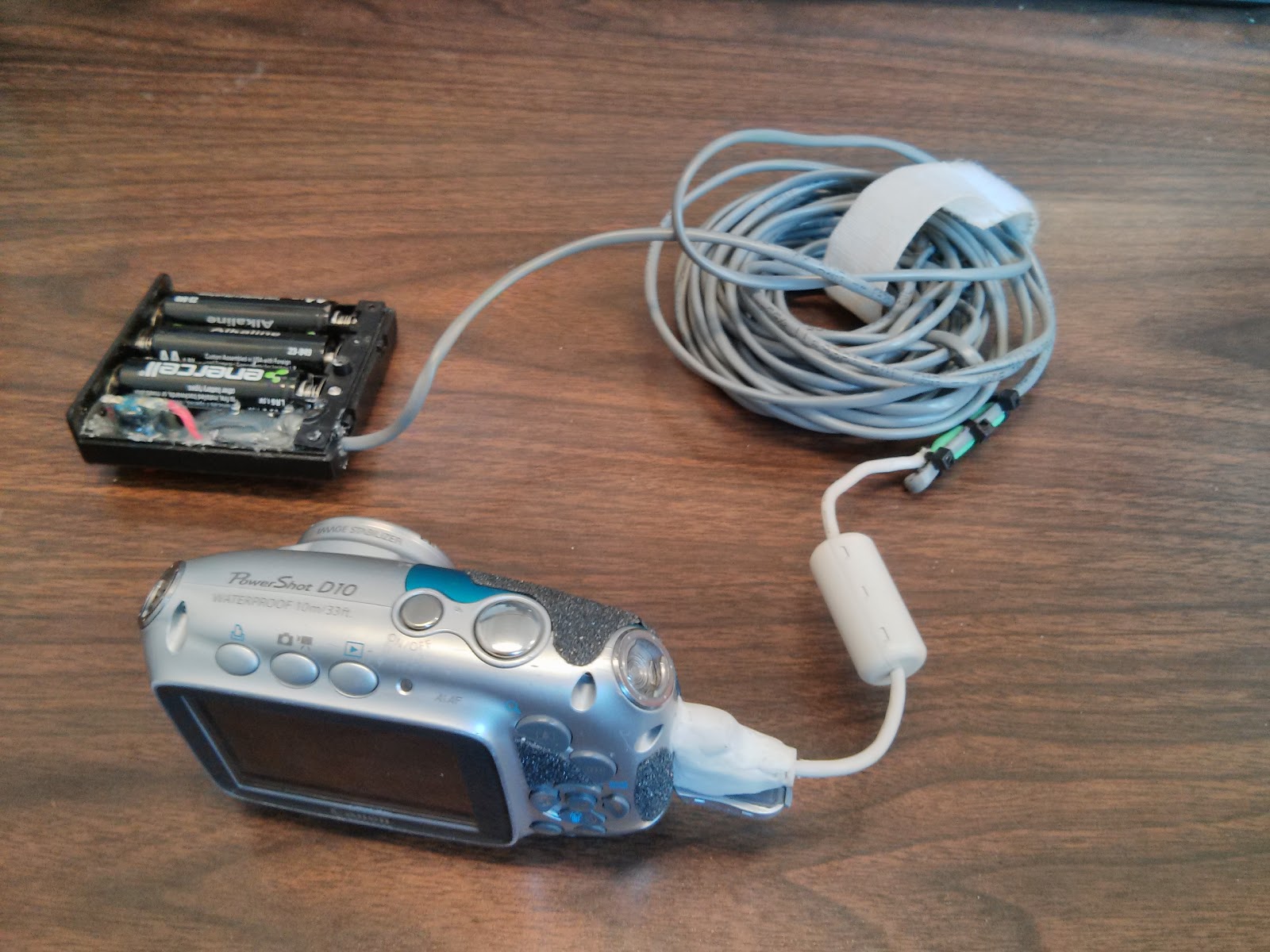 As some of you may know, I use occasionally use pole photography for my research. Getting the camera on the pole is the easy part (Pole Camera), the hard part is getting it to take pictures while it's up there.

I use almost entirely Canon cameras and CHDK is such a wonderful add-on to the smaller cameras I use. One key thing CHDK allows you to do is use the USB port on the camera to trigger the camera. This post is a rehash of the basic remote trigger that CHDK has on their site (http://chdk.wikia.com/wiki/USB_Remote), but I thought I'd post my design if you're interested in building your own.

(This was a quick build, so I just ran down to RadioShack for the parts)

Most CHDK compatible cameras do not need the full 5 volts that USB usually provides. Most trigger just fine on the 4.5V that three 1.5V cells (like AA, AAA, or CR2032 batteries) provide. I went with 3 AA's so that the batteries would last a while.
**Some cameras do need a full 5 volts

This setup uses just one push button (momentary, normally open) switch to trigger the camera. CHDK can operate in two modes:
One push mode is far easier to work with, so that's how all my cameras are setup.

Another consideration is how quickly the focus/release happens. The normal settings will start the focus/release as soon as the button is pushed. This is good for quick shots, but I've found that sometimes this can lead to blurry photos from the top of the pole because the camera is usually swaying around a bit. To combat this, I enable the Sync setting. What this setting does is allow the camera to focus when the button is pushed and then release when the button is released. This way you can hold down the button and allow the camera to focus and get the swaying under control before letting go of the button to release the shutter.

This is just a basic series circuit with the battery, on/off switch, and trigger button.

I wanted everything to be enclosed in a nice neat package so I modified the 4X AA battery case to only have three batteries and I embedded the push button in the space where the fourth battery used to live.

First thing on the list was to modify the fourth battery place. The positive contact slipped out of the slot it was set into with some gentle persuasion. On the negative end, I used my snips to cut out the spring and soldered a short piece of wire in its place. Next, I drilled the hole for the push button, got it set, and then soldered the short lead to one of the button terminals.

I opened up the panel inside the case (on the right of the bottom picture) to access the power switch and the stock wires. I removed the stock wires and threaded my 2-conductor wire into the case. The on/off switch was in series with the negative side of the batteries, so I soldered the negative conductor of my long wire to the on/off switch output and the positive wire to the trigger switch.


Next, I added the USB connector to the top. I cut the stock Canon camera cable in half and stripped about an inch of the cable jacket on the cut end and teased out the four conductors buried inside. The important wires inside are the Black and Red ones (they correspond to the power pins in the connector). The other two wires are the signal wires and they are not used with this type of trigger. With some solder and some heat shrink carefully connect up Red to Red and Black to Black. Now is a good time to check the whole circuit with a multimeter. First, check for shorts, then check for the proper voltage and polarity. If everything looks good, you can seal the whole thing up with some more heat shrink. I also added in some strain protection on this delicate joint by making an S-bend in the wires and using zip-ties on either side of the splice to keep things from moving too much.

Nothing left to do but close things up and give it a test. Load up CHDK and set up the remote options, and like I said earlier, I use the one-push with the Sync option enabled. 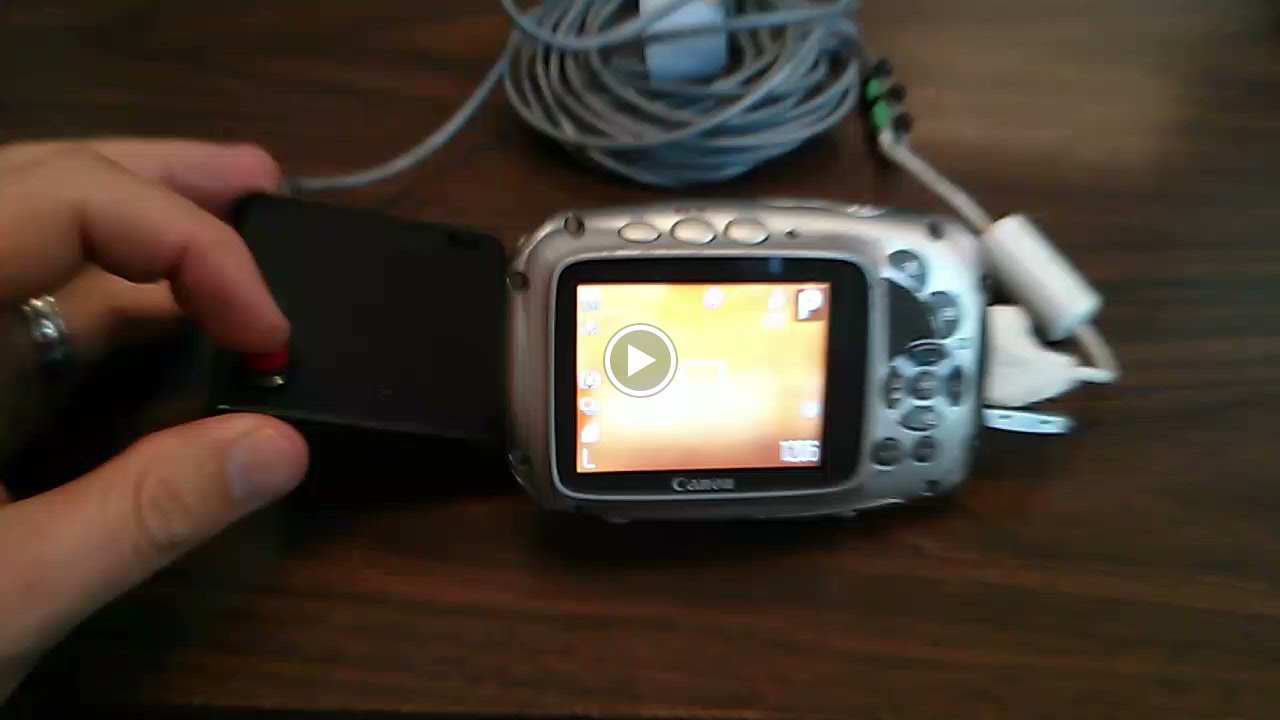 A few extra options that you can see in some of the photos.
Stay tuned for the wireless version!

This setup has taken two trips to Costa Rica now and gotten a bit wet on both trips but still works beautifully. It has taken well over 3,000 photos on the original set of AA batteries.

Posted by James Dietrich at 4:48 PM
Email ThisBlogThis!Share to TwitterShare to FacebookShare to Pinterest